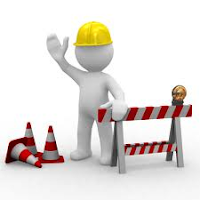 The construction contractor is on track to begin its scheduled pile driving outside the library [this] week. Plans call for 36 piles to be driven in a 20’ x 25’ space near the library's former main entrance and 12 piles to be driven in a smaller area adjacent to the library on its Dixon Hall side. Crews will pre-drill the holes for the piles first, using a large auger. This should make the piles go in faster and easier, and is expected to reduce the duration of the repetitive pile driving noise.

The pile driving operation overall is still expected to begin next Monday, December 2, and last 4-5 days, although most of the earlier part of the week will be taken up with the delivery of piles and necessary equipment to the fenced construction zone. Most of the pile driving itself is likely to occur on Wednesday and Thursday.

The work must be completed by the end of Friday, December 6, since the construction contract prohibits disruptive work on the site during study and exam periods.

The piles to be driven in a 20’ x 25’ space near the former main entrance to the library are part of the current construction of a base for the large crane that is to arrive on the site in January. The piles to be driven in the smaller area adjacent to the library on its Dixon Hall side will be part of the eventual base for the location of a permanent emergency generator for the libary building.
Posted by Andy Corrigan at 1:40 PM No comments:

Concrete Pouring and Pile Driving Ahead

This week construction crews are scheduled to begin the pouring of concrete through the rooftop hatch at the top of the Freret Street emergency stairwell and into the forms now built for the shear wall slab inside. For this, two big trucks carrying the concrete will need to be directed through the fenced construction zone's main gate and the concrete itself will be transported to the top of the roof (and into the forms) through a tube attached to a large “boom,” which looks sort of like a thin crane on wheels. The trucks should arrive on site Thursday afternoon and Friday morning; the boom will also need to be brought on site in advance of the pour.

Once the shear wall is poured and the concrete sets, the contractor can then begin to finish the inside and outside of the stairwell, which should be returned to normal in a few weeks and on schedule.  Indeed the stair cutting operation described in the previous post was completed in less than half the expected time frame.

The contractor will also very soon begin work on the the slab foundation that will be the materials ramp and base of the external elevator planned outside the library building in the fenced construction zone. The external elevator will be used to regularly transport crews and materials to the rooftop.

Meanwhile, work crews have already completed the rooftop handrails and grid-like safety lines that will allow for more workers to begin preparatory operations on the library roof, even in advance of the external elevator.

Eventually, and before the fall semester study and exam period that begins Dec. 6, the contractor will need to drive 55 piles, in a 20’ x 25’ space near the former main entrance to the library, for the foundation that will serve as the base for the construction crane. Because the piles will be driven in a relatively confined space, the time frame for this task is expected to be limited to a period of 4-5 days.  About a dozen piles will also need to be driven in a smaller area between the library and Dixon Hall for a foundation that will eventually serve as a base for a permanent emergency generator for the building.
Posted by Andy Corrigan at 11:20 AM No comments: