The construction contractor and project managers are now targeting the end of November or early December as the date for substantial completion of the construction portion of the project.  At that point, they say, only minor "punch list" items should remain. 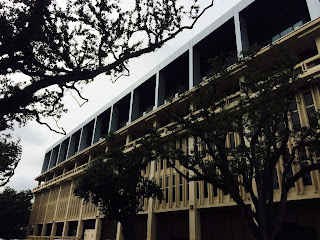 The library hopes that the new upper floors will be ready to be opened for use for the start of the Spring 2016 semester.

One sure sign of progress is that the area of the central stairs that had been closed between the 3rd and 4th floors has now been opened. This will give library users clear access to all open floors of the building via the central stairs, for the first time in a long time.

It will also reduce if not eliminate the need to rely on the Freret Street and Dixon Hall side emergency stairwells, at least for now.  Portions of the central stairwell will still need to be closed at some points in the weeks ahead in order for crews to install glass panels next to the handrails for each stair section, but this will be phased in sequence, a day or so for each floor. Project managers say the subcontractor handling this operation would likely end work on each of these days between 3-4 pm.  In other words, it appears that the operation might not block full use of the stairs in the late afternoon or evenings.

Furniture: Crews from Associated Office Systems have nearly completed the delivery and installation of the furniture for the 5th and 6th floors. Staged deliveries were brought into the library during the past couple of weeks through the exit door on the Dixon Hall side of the building as well as from the loading dock at the southwest corner of the building, and then to the upper floors via elevator #2 from the 1st floor lobby.  The furniture included study carrels, tables for media and microforms viewing stations, large tables for computers in each elevator lobby, classroom furniture, office furniture, and more.

Most of the shelving for the upper floors had already been delivered and installed earlier this fall, with just one more area of shelving, at the southeast corner of the 5th floor, still pending.

Fire Suppression System: The construction contractor and its subcontractor for the building’s new fire suppression (sprinkler) has for the past couple of weeks been introducing water to the system, floor by floor. They began on new 5th and 6th floors, then worked downward.  Prior to this the system has been tested several times: (first) as lines and heads were installed in quadrants on each floor and (second) for entire floors before sprinkler crews were allowed to progress downward through the building. The tests of the system were air pressure tests that looked for air leaks that might expose problems.

The tests were not infallible, however.  When water was introduced to the system on the 3rd floor, a leak occurred around a seal on a main line just outside the entrance to Classroom 309 in the ILC/CLUE area and over an adjacent office doorway. Thereafter, as the operation proceeded, the system was retested multiple times again, this time with higher levels of air pressure said to provide a closer approximation of the water pressure that would be produced in the same pipes.  Now that water has been brought into the system as a whole, more stringent testing of the entire fire suppression system and its pumps and controls will soon follow. This will be performed by independent commissioning engineers and eventually by the state fire marshal.

Elevator:  Presently there are still only two elevators serving the library building and one of the two is designated for construction use only, which leaves one elevator for general library use.  The last remaining elevator to be brought back online after having been rebuilt and extended to reach the new upper floors is still awaiting clearance from the city's elevator inspector, who has called for some additional work within the elevator shaft before all three elevators can be returned for normal use. The construction contractor reports that the work in the elevator shaft might be completed by the end of this week.

Exterior:   Most of the construction fencing around the exterior of the building has now been removed and landscapers have largely returned the space surrounding the building to its original condition, although the area bordering the library along Freret Street still needs to be re-sodded.  Tulane Facilities Services is scheduled to place new plants in the planter boxes around the edge of the building later this week. Tulane Capital Projects & Real Estate (CPREG) hired an outside contractor to clean the exterior of the lower floors of the building.
Posted by Andy Corrigan at 11:16 AM No comments: