Advanced Notice of Some Rough Patches Ahead on the Construction Calendar

Here is a heads-up warning and reminder of some rougher than normal phases of the construction project ahead on the calendar. Most of these projects have been noted before, but more details about their scope and timing are being discussed by the project managers now that the construction work is advancing overall.
By contract agreement, all disruptive construction work is required to cease during the library's study and exams periods, the next of which will be the period of Dec. 5 to Dec. 16.
Posted by Andy Corrigan at 10:25 AM No comments:

The subcontractor installing the fire suppression (sprinkler) system is expected to begin moving to the Phase 2 northwest quadrant of the 2nd floor tomorrow, just about a day behind schedule. 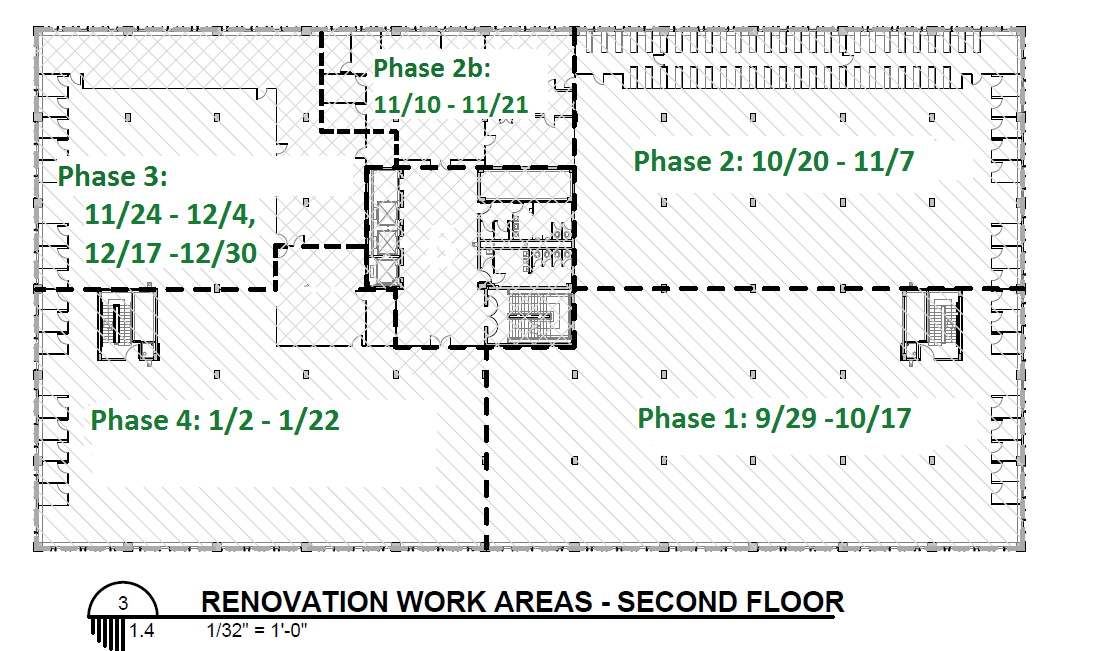 Workers have already removed most of the plastic sheeting from the book ranges in the Phase 1 area, where work began on Sept. 29. Indeed, in this past phase they were able to uncover some book ranges early, in stages, as they worked outward from the center of the building, once the main “feeder” lines for the system were run.

Work will begin in the Phase 2 area with protective covering of the book ranges and the carrel areas, and with the removal of ceiling tiles in the rows where pipe will be installed. Faculty carrels affected in Phase 2 are F217-F224. The graduate study carrels affected are those in area 224V, 225V, and 226V along the northwest wall of the building.

It is not yet known whether the short delay in moving from one zone to the next with require a revision to the phasing schedule for the 2nd floor overall, or whether the subcontractor will make up the time within this next phase. A new crew was brought in for the 2nd floor work and after an initial learning period the crew is reported to be handling the work efficiently with few problems, so the current schedule may hold. If not, a revised schedule will be posted as quickly as possible.
Posted by Andy Corrigan at 1:47 PM No comments:

Tulane’s department of Capital Projects & Real Estate (CPREG) in consultation with the university’s Office of Environmental Health & Safety (OEHS) has told the library that an upcoming project requiring the ceilings to be removed in each elevator lobby of the Howard-Tilton building will require floor closures. The ceiling removal project is expected to begin around the second week of November. If the schedule holds the elevator lobby of the 4th floor will be closed first.

Because the configuration of the 4th floor does not allow through-access from one side of the building to the other except through its elevator lobby, blocked access will require the entire floor to be closed for public use. In other words, without access to the central stairwell on the 4th floor there would not be a second means of exiting the floor if for any reason the emergency stairwell on each side of the building were blocked. 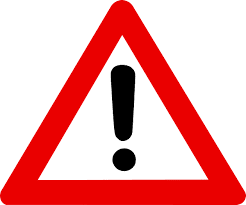 The 4th floor houses the Latin American Library, the Music & Media Center, and general books stacks with call numbers A – DA. These areas would be inaccessible during the period in which the 4th floor lobby would be closed, and this period has been projected to be about 11 working days, expected to begin around the second week of November. The library may be able to arrange a retrieval system for books in the Latin American Library and the general books stacks, but the recorded materials (CDs and DVDs) housed in the Music & Media Center would be off limits even to library staff since there is no access there from outside the elevator lobby.

Removal and replacement of the ceilings in the existing elevator lobbies is needed to install the fire suppression (sprinkler system) that is required by building codes governing the construction of the 5th/6th floor building addition. The ceilings to be removed were made with a material containing a low level of asbestos and their removal will require special containment areas to be set up around the lobbies and procedures for monitoring. But the blocking of emergency egress caused by the work would be the reason for shutting off public access to a floor and not necessarily the presence of asbestos there--since no asbestos release is expected during the removal process because of the strict regulatory abatement procedures to be used, according to CPREG and the OEHS.

Building Closure in December:  Once the ceiling in the 4th floor lobby is removed, the process would be repeated on the lower floors. The exact sequence has not yet been set, but general plan would be to avoid closure of the 3rd floor with its large Study Commons before the study and exam period that begins on Dec. 5. The sequence will need to allow the abatement contractors and other crews involved to gain some experience with the smaller upper floor lobbies before tackling the much larger ceiling that will need to be removed on the 1st floor. Because of the scale of the 1st floor work and its location in the path of the main entrance to the building, the central stairwell, and the main access to the elevators, the 1st floor work would be scheduled for the intersession after exams end on Dec. 17. For a period during the intersession the building will need to be closed. After the 1st floor work is completed and the building reopened, the work would then resume on any upper floor elevator lobbies remaining.

The ceiling removal project is currently still out to bid, so some details and an exact schedule and sequence for the project are not yet determined. More information will be posted as the project takes shape.

For the library the construction is progressing toward its most disruptive period, and somewhat reminiscent of those early post-Katrina days, it’s going to get worse before it gets better. Also coming in November will be the shut down and planned replacement of two of the library’s three original elevator units. These units, elevators 2 and 3, are expected to be out of commission for about 18 weeks in order to replace their cables and controls and to extend them to reach the new 5th and 6th floors. Meanwhile, up above, the contractor will need to begin to use jackhammers to start the larger-scale removal of the old cement layer-roof membrane covering what will be the new 5 floor and this may necessarily need to begin with removal of the thick concrete platform on which the old elevator mechanical systems presently reside.
Posted by Andy Corrigan at 8:33 AM No comments:

Work has begun on a set of mechanical control rooms planned for the 1st floor adjacent to the emergency exit on the Dixon Hall side of the building. 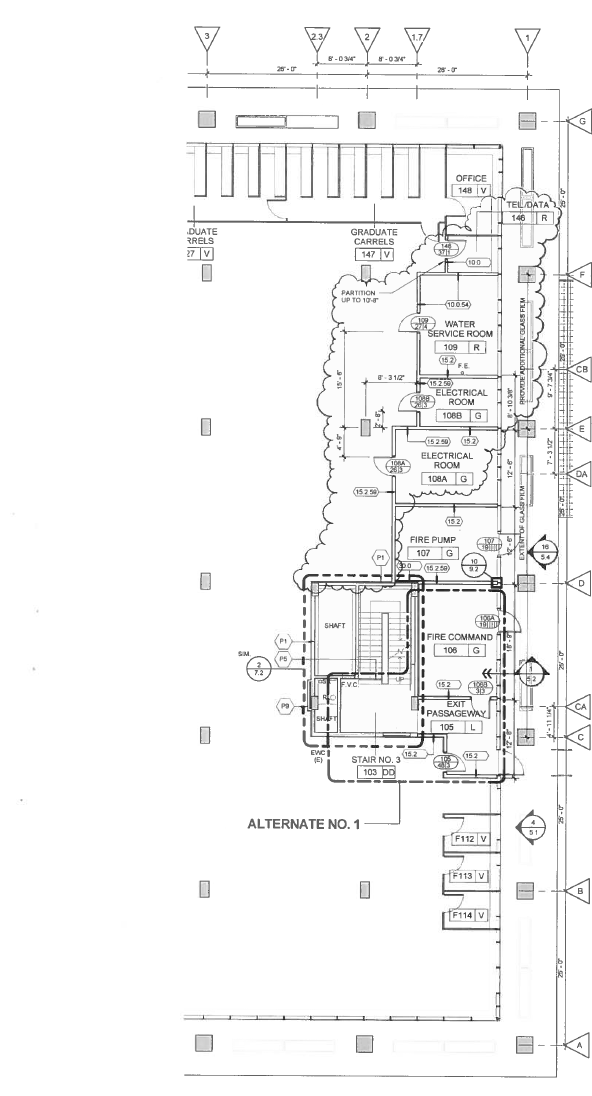 This part of the construction project displaced some shelving in the general books stacks nearby as well as several faculty study carrels.  However, with most of the building’s mechanical systems to be raised to the new 5th floor, the equipment in these rooms will allow for ground floor access to the building’s primary controls in the event of a future emergency.

The new control rooms will include some electrical rooms, a fire pump room, a water service room, and a fire command center.

For the remainder of this week a crew will be pulling up the old floor tile in the area that will be underneath the control rooms. This area is presently sealed in a containment area due to trace amounts of asbestos used in the old tile that will be removed. Next week the permanent walls around the perimeter of the control rooms are scheduled to be built. Until those walls are finished, access to the key-paneled door to the graduate carrels nearby will be blocked. A temporary work-around has been arranged hat allows carrel holders access through a small door that opens into one of the adjacent aisles in the stacks.

Construction of the control rooms is expected to take about a month overall.

Meanwhile, the construction contractor began the installation of the fire suppression (sprinkler) system on the 2nd floor as planned this past Monday.  The sprinkler installation work on the 2nd floor will be done in quadrant phases that will progress counterclockwise in sequence.
Posted by Andy Corrigan at 1:58 PM No comments: