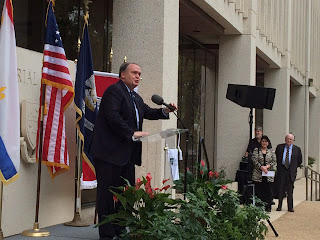 The event was organized by Tulane's Office of Development and it began in the afternoon in front of the library building, where a stage had been set up for a series of commemorative speakers that included:
Students, faculty, library staff, and other interested parties had been invited to the dedication event in a general invitation, and written invitations had been sent to important university donors and individuals specially related to the project. These individuals included principals from the library's partners in the project including Tulane Capital Projects & Real Estate, which supplied project management with assistance from VR Management, a division of VergesRome Architects; Eskew+Dumez+Ripple, which was the project's architect; and Roy Anderson Corp., which was the construction contractor.

Among those on hand who managed the design, oversight, and completion of the project were:

The 5th and 6th floors were opened for use by students and faculty in January near the start of of the spring 2016 semester and with some work still continuing.  Today the new spaces are fully functional, with only minor finishing touches remaining as punch list items in the construction.