The Big Move of collections to the library's new 5th and 6th floors, which also included large shifts of collections to help restore some lower floor spaces to their original use prior to Katrina, has been completed.

Library Design Systems (LDS), the Houston-based company that last fall was awarded the contract for move, wrapped things up on March 9 as its workers, as a final task, filled some replacement cabinets delivered to the Microforms area on the 6th floor on the same day.

The move went pretty well, with the work going better during its earlier phases that involved the straightforward transport of material, and less smoothly with the last part that involved a more complex shifting large areas of the existing collections on the lower floors. But the overall project was admittedly an enormous undertaking with a lot of complicated moving parts. It is a good project to have behind us. 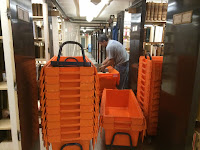 The project moved to library's new 5th and 6th floors more than 50,000 linear feet of library material that had been housed in several temporary locations. The 4th floor and 2nd floor shifting phase moved more linear ft. of material than that, albeit largely over shorter distances within the same building.

The move filled the new general "static" or traditional shelving on the 5th and 6th floors with books and government documents. On the 6th floor it filled large three areas of high density shelving for music books, music and media recordings, and rare books. It also moved some 125 microform cabinets and rehoused 1.2 million pieces of microform. Materials were moved from: the library’s off-site storage facility; the 7th and 4th stacks levels in Jones Hall; the temporary area for Music & Media located on the H-TML 4th floor; the open stacks areas in the northeast quadrant of the 4th floor of the Howard-Tilton building and other areas of the open stacks on floors 2-3; and the temporary area for Microforms & Newspapers that had been located on the building's 2nd floor. 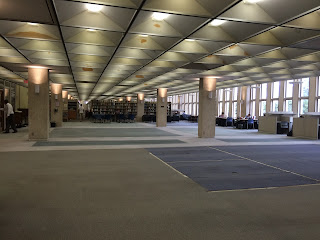 The shifting on the lower floors cleared the way for the shelving underneath the wooden ceiling from the former Aron Room on the 4th floor to be removed to create more user space. It did same for the even larger space on the 2nd floor that used to be a central reading room.

Many people on the library end contributed to the move and its planning. David Schneider, an engineer from VR Mgt. and Donna Cook, the library's director of Technical Services, assisted me as principal Tulane contacts. Others included Lisa Hooper, BJ Blue, Doug Park, Jeannette Hunter, and Kelsey Chapman from our music, media, and microforms areas; Josh Lupkin, Chief Bibliographer for the Humanities, Kathleen McCallister, from Rare Books; Bruce Raeburn, Director of Special Collections, and Eric Wedig, Chief Bibliographer for the Social Sciences and Government Publications. Shane Robichaux and his Stacks Management staff Christie Otis and also Chris Gonzalez and Jianli Yao deserve special thanks for their help at various points in the move. Del Hamilton and her staff from LAC Group helped out at the library's offsite facility at 900 S. Jefferson Davis Parkway. At one point during the final week of the move most of the library’s Technical Services division could be seen shelf-reading on the 2nd floor, in a volunteer effort to identify areas where the final shifting needed to be corrected. Many others contributed with signage and by assisting library users during the move, and the operation probably affected all staff in the Howard-Tilton building and some in Jones Hall in one way or another.

The moving project had begun roughly on schedule just after the fall study and exam period and the completion of phases 1 & 2, which filled the shelves on the new upper floors, roughly coincided with the opening of the new space. The last phase was completed only a week or so later than the moving company’s original estimate and, importantly at a cost low enough to fit with federal and state expectations.
Posted by Andy Corrigan at 11:48 AM